Camilla’s parents pay her a visit; and the day starts off exactly how she expected.

I can’t believe she would pop up on me like this! I stomped circles around my living room. No. Actually, I can. This is classic Bridgette. Only thinking of herself and what she wants with no regard for my feelings or my time. I mean, what if I was busy today? I plopped down on the sofa; relieving the floor from the hour-long assault it had been subjected to. I could’ve easily been doing something that took real planning, like… a vacation.

People go on vacations all the time during the summer. So what if I was on my way— No. Already gone to a resort in another city or state or country, even? I smiled at the thought of having the upper-hand for once. She would’ve shown up here with a fresh supply of unsolicited opinions, hot and ready to serve; and I would’ve been on the beach, in a bikini, sipping my third margarita, without a care in the world.

My smile widened as the image of her disappointed face in front of my unanswered door played on a loop. This would be her first taste of defeat, and the fact that I was the chef behind this salty-ass dish would take her to new levels of anger. The type that would have her calling, making all kinds of threats, if I didn’t pack my bags and get my ass back to Atwood ASAP. So dismissing her calls, letting her go to voicemail, as her loss of power became overwhelmingly obvious, that would send her into a fit of rage.

I snickered at this imaginary victory. My laugh intensifying as the vision of her throwing the fifty-year-old equivalent of a tantrum appeared in this fantasy.

I collapsed into the sofa cushion, on the verge of tears, as gut-busting laughter took over me. I was r-e-l-i-s-h-i-n-g in this scenario, but then the scariest sound imaginable ripped through my apartment, nearly yanking my soul from my body.

I jumped to my feet, my heart doing full-blown dance moves, as I sprinted across the room. That horrifying-soul-shattering sound that had me visibly shaking in the window of my patio door was the slamming of a car door. And judging by the way the car whimpered when the door smacked it — I was sure the owner was my mom.

I peeked behind the curtain to confirm my suspicion. It was her. Arm-in-arm with my dad, James, cuddled up like they were on some kind of date. She whispered something to him. Probably the details of her evil plan— Wait. No. She wouldn’t do that ‘cause then he’d take my side, and she hates when he does that. So it must’ve been something else. Something I’d have to figure out later because they were on their way up.

I dashed into the kitchen for one last look-over. The sink, my main area of concern, seemed clean, but my version of clean was nothing like my mom’s version of clean. So, if there was so much as a speckle of last night’s spaghetti sauce left anywhere, she would find it — and I would never hear the end of it.

The sound of their footsteps met me at the door, and with the most convincing smile I could muster up –given the circumstances — I opened it.

“Hey, Daddy!” I wrapped my arms around my dad’s neck; a spark of genuine excitement taking the place of dread for a moment.

“Hey, Pumpkin!” he replied in his deep-soulful voice, taking me right back to the happier moments of my childhood.

He lifted me off the ground and spun me around like this was his homecoming, and I was still the five-year-old girl waiting by the door for him. “I’ve missed you so much!” he said.

My mom rolled her eyes as she pushed past us and into the living room. “Put that girl down,” she said. “She is too big to be swinging around like that.”

“Oh, hush Bridgette.” He dismissed her unnecessary commentary. “She’ll never be too big for my hugs.”

“Hmph.” She chuckled sarcastically; bypassing the entire living room and heading straight into the kitchen. “Tell that to your back.”

I pushed the door closed and scurried across the room. “Hey, Mama.” I said, following closely behind her.

And just as I predicted, this room was first up on her ‘inspection checklist’. She was looking straight ahead, so I couldn’t see her face, but I knew she was watching, judging everything.

She sighed, as if my presence was annoying her.

“Hey, Cami,” she replied without so much as a glance in my direction.

I had no idea what crime I committed between the door and the kitchen, but I continued to follow her; hoping to thaw her cold shoulder and earn myself a spot on her good side.

“How was the drive over?” I asked.

“Was there any traffic or…” my voice faded to silence as she approached a dead end.

She rerouted, heading back in my direction, but as she neared the sink, her footsteps halted. From the middle of the room, she meticulously scanned the walls, the stove, the countertops, and especially — the sink! Why is she staring at the sink?! She moved in closer, and as I stood there, frozen, inspected the base of the faucet; a concerning look on her face.

It was time to go— Not her. Me. ‘Cause I knew where this was going, but if I attempted to evade the criticism that was coming my way, it would only make things worse. I needed a diversion, something big and unavoidable like… a break-in or natural disaster. But my door was locked and the weather was nice, so I had to work with what I had.

I faced the living room; fear practically oozing from my body, but my dad — my protector, and the only thing that keeps her from truly speaking her mind — was too busy repairing the TV stand to see I was in danger. His helpfulness is going to get me verbally murdered!

She turned to me slowly. Oh my God. And as my arms wrapped tightly around my body. OH MY GOD. Surprised me by saying, “You have a roommate?”

She got that from the sink?

Was this some kind of set-up? Getting me to let my guard down so when shots start firing, I wouldn’t see them coming?

She let out a small chuckle as she walked past me. “Well, that explains it.”

This was definitely a set-up.

I spun around to keep my eyes on her. “Explains what?”

“The sink, Cami,” she said. “How many times have I told you about wiping it down when you were done with the dishes?”

And there it is. The criticism. The only thing she ever has to say to me and the one thing that ruins… everything.

Oh, how I’d pay money — real money — to have her lose her voice for like a decade or three.

“Enough for me to know better than to think you finally started listening just because you moved your behind to Atwood.”

What does me moving to Atwood have to do with sinks and dishes?

“Speaking of which,” she went on. “I’m glad you finally found time for us in your busy schedule.” She rubbed my dad’s shoulder playfully. “Your daddy here has been dying to visit.”

Was she for real? What part of receiving a text with their arrival time was my decision? How was I even—

Oh… that was my crime. Never extending the invitation she’s been demanding for months. Mystery solved, I guess.

He finished his work on the TV stand. “It’s a good thing too,” he said, pulling himself up from the ground. “This leg was so loose, another day or two,” he tapped the top of the TV. “And this would’ve been on the floor.”

She fake-gasped. “Did you hear that Cami? It’s a good thing we’re here because without us, you’d have trouble on your hands. Again.”

And for this crime, she’s going to spend the rest of the day making me pay for it. Is jumping out the second-floor window a logical option?

If you enjoyed this episode of Camilla – Vol One: Impulse, be sure to subscribe so you don’t miss the next one!

Hey, I'm India! Long time simmer, wife, mama and tea enthusiast. I love writing stories inspired by my favorite sims and helping the community get creative with their games. View all posts by India | Mellindi

This site uses Akismet to reduce spam. Learn how your comment data is processed. 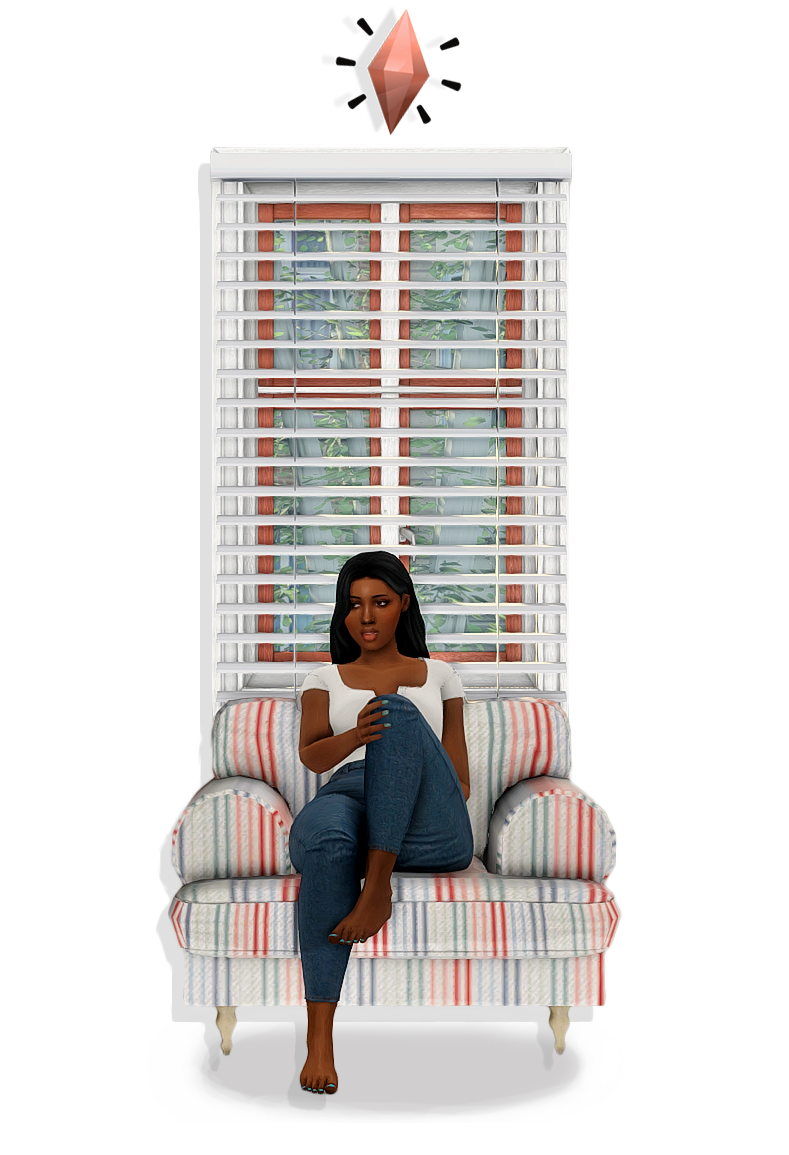 I’m India, long time simmer, (since Sims 1) wife and mama who pretty much runs off of sweet tea. This place is like my home away from home where I share all the things I love about the Sims 4. So far we have sim stories, mod suggestions & tutorials, a few builds and some sims. I have so much more that I can’t wait to get posted here, there just aren’t enough hours in the day!

If you like what I do and would like to support me and the site, please consider buying me a coffee — well, sweet tea >>